Last week, based on an invite from the teacher, I paid a visit to my oldest daughter's first grade class to talk about geology.  I knew they had been learning about sand, so my job was to take it up to 11.  I also knew, based on what my daughter brings home, that they had previously talked about solids, liquids, & gases, but otherwise they don't get a whole lot of science in first grade.

I brought with me some samples; the ONU Geology program has lots of samples of rocks & sands (obviously), so I took some especially relevant ones to show the kids.

The main point I tried to get across to them is this: different kinds of sand come from different kinds of rocks.  I figured for first graders that wasn't a bad place to start.  The idea is to have them connect in their minds that rocks, when eroded, will form sand, and that there is a direct connection between these two kinds of materials. This is, really, their first introduction to the rock cycle. 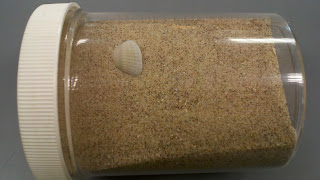 I took with me 4 samples of sand.  The first one is a typical quartz sand in a jar that had a couple of nice shells in it.  That one I passed around first and had each student rotate the jar of sand until they found the secret prize inside.  Lots of wide eyes and careful looking at this point! 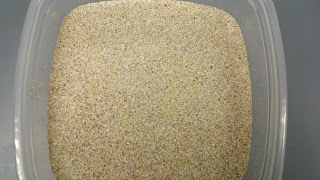 After I had their interest, I then showed them three other sands and three related rocks.  The white sand here is loaded with calcareous material, and the white "rocks" are pieces of some kind of coral from the same beach. 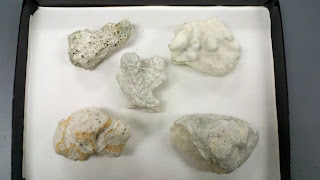 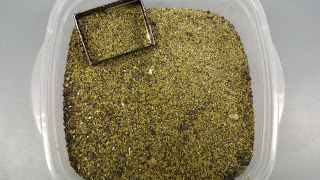 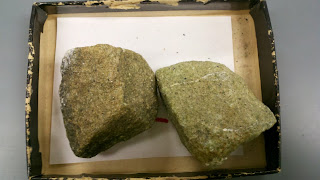 The green sand is olivine rich, with black chunks of basalt and white pieces of crushed coral.   The green rock is dunite. 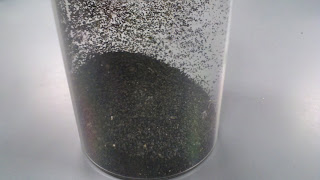 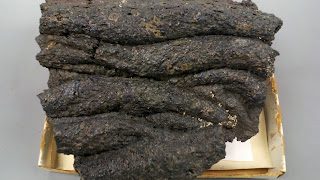 The black sand is eroded basalt cinder for the most part, and the black rocks is a basalt with obvious pahoehoe texture on the top surface.


I talked about the three different rocks as representing the three major rock types: the dunite as a metamorphic rock, the basalt as igneous, & the corals as sedimentary.  They didn't quite pick up on the differences or the words well (and I didn't expect them to), but they were at least exposed to the terms.  They liked the basalt the best - it is a pahoehoe sample from Hawaii, so we talked about lava & how it is a hot, liquid rock that cooled to form this solid material.  They were really impressed with that!

Granted the olivine rich sand didn't come from the erosion of dunite, but the samples allowed them to see that there are connections between rocks and sediments. 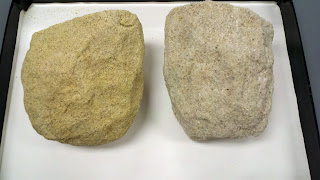 After we looked at those, we ended with this question: what might happen if you took a sand, and squeezed it really really really hard?  You can't do this with your hands, but the Earth is able to squeeze sands hard enough that they turn back into rocks!  At this point I pulled out a couple of sandstones that are easily seen as grains of sand that are all stuck together.  Minds blown!  That was another moment where their eye-brows were all raised.  Again, here they were exposed to another idea from the bigger concept of the rock cycle.

It was a really fun experience.  These students are considerably younger than the ones I'm used to teaching!  And, if I'm totally honest, they are in general a lot more enthusiastic about learning than some college students!  :-)
Posted by CWCarrigan at 10:43 PM