Unfortunate news today that a chapter on climate science, which was being written by Texas Tech Professor Katharine Hayhoe, is apparently not going to be included in a new book by former Speaker of the House and Republican Presidential hopeful Newt Gingrich.  The new book was intended to be a collection of essays about the environment, a book that many Republicans who are concerned about the environment were looking forward to.  This action as well as others in his most recent campaign for the Republican nomination show significant movement back away from legitimate climate science.  As recently as 2007, he outlined a position on how the Republican party might offer alternative political solutions to climate change in an interview with Andrew Revkin, of the NY Times Dot Earth blog.  However, his recent comments show a new opposition to a cap & trade solution.

Hayhoe is also well known as an evangelical Christian, who has written a book on climate change with her pastor husband, A Climate for Change, a book designed to engage evangelicals in the debate on climate change.  It is high on my reading list for 2012.  Her views on climate science are summarized in this interview with blogger Jonathan Merritt.  Giver her credentials and influence among evangelical Christians, Gingrich's removal of her chapter from his book on the environment is a terribly unfortunate turn of events for the progression of understanding climate science in America.
Posted by CWCarrigan at 10:20 PM No comments:

Back a couple of months ago, I had the opportunity to visit the Arizona Science Center, located in downtown Phoenix.  Much of the exhibits were for sciences other than geoscience - stuff like motion, gravity, building things, the human body, weather, and similar things.  There was one section on geology, and so, you know, at least it existed!  One exhibit was on the rock cycle, which had some interesting, amusing animations (although I wondered if they introduced some misconceptions, but that's another story).  Another, however, was on looking at rocks with a microscope, and showed images of optical mineralogy.

Yes, that's right, a science museum had an exhibit on optical mineralogy.

There were a bunch of different samples of rock types with a hand magnifier to look at them, but at the top, there were two screens that kept rotating through a series of images taken with a polarized light microscope.  There wasn't much information about the images, but they were at least pretty to look at & had names that lined up well with the hand samples below.  Some of the images were taken with the analyzer in & some with it out, but it didn't go into any details, unfortunately.  Here's a shot of the full display, with a cross-polars view of a garnet mica schist in the screen.
Here's the floor plan of the area that contains this exhibit, mouse-over the gray rectangle at center-left to find it (unfortunately not a lot of info on the website either).

So that pretty much made my day.  I enjoy teaching optical mineralogy, but it is very tough to do, even with dedicated geology majors.  Maybe if there were a few more exhibits like this in the world of science museums, my job would get a shade easier.  And of course, if more people in the world knew even a few basics about how to identify rocks, we'd all be a lot better off!

So on one final note, who can name this dark brown, wedge-shaped beauty in the center of this image? 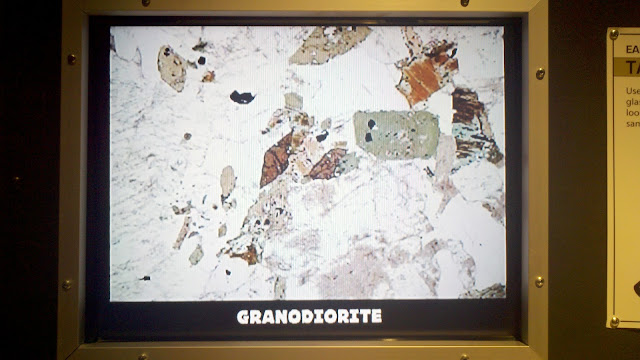 Today over at Georneys, Evelyn suggested, in what's sure to become a geoblogmeme, posting geology pictures.  I love it when geologists share their photographs, and since late August I've started building my collection of geology photos and posting them on Google+.  It all got started when I decided to take a leap and submit one of my photos to the NASA site Earth Science Picture of the Day, and they accepted it.  I mainly did that because I was a bit bored of all the cloud formations that tend to dominate the EPoDs (need more geologists submitting their pics to this site!).  Anyway, that experience as well as the huge amount of great photo sharing on G+ led me down this path.
The pics are being collected in an PicasaWeb album.  When I post them on G+, I give a longer description & explanation so my followers can learn something cool about geoscience.  All of the photos are geotagged and their locations can be seen on the map in the PicasaWeb album (unfortunately, the same album viewed in G+ does not have the spiffy googlemaps with it), so that others can visit these locations and see for themselves.
I've cross-posted the links to the G+ posts on my BookFace & Twitter accounts, but so far the blog here hasn't seen them.  I've also tagged each of these posts with the hashtag #geopic.  In this way, anyone can see the photos and search for the descriptions I wrote about them easily on G+.  I'm happy to let any geoscience instructors use them (unaltered, of course) as examples in their lecture slides.  A lot of photographers post beautiful pictures of landscapes, and I'm not a serious photographer in that way; these are meant for science, not necessarily for art.
So without further ado, here's the link to the collection:

The collection so far includes 14 pictures (I post about 1 per week).  I also upload the photos to my panoramio account so they can be viewed in Google Earth & Maps.  The collection so far includes about 10 structures (3 folds, a textbook delta clast, deformed mudcracks, en echelon veins, liesegang rings, a chilled margin in granite, and GIANT-size joints & cross beds), 2 landforms, 1 fossil, and 1 mineral/crystal.  I guess that's a bit skewed toward the structures!

Diverting attention here at the blog again away from mineral resources & environment (I seem to do that more often than not lately!), I'm writing up a post on the driving forces of plate tectonics.  No time for uber-basic stuff here; gotta get deep in a hurry.

Yesterday, a geology student at a university tweeted that his physics professor had told him that plate tectonics was driven by the gravitational force from the moon.  Wowsa, that's awful bad.  Downright ridiculous.  A number of folks in the geotwittersphere have jumped in on the conversation, pointing out how silly this is.

However, within this conversation, a common misconception has arisen that could benefit from clarification, and that is the idea that mantle convection is the main driving force of lithospheric plate motions.  That's not entirely true either.  That model was initially assumed as true when plate tectonics was proposed, but has been discarded.  This model is still sometimes shown in introductory geology textbooks, and hence it still is propagated.  For example, in the text "The Changing Earth", 4th ed., by Monroe & Wicander, published by Thomson Brooks/Cole, 2006, Figure 1.9 explicitly shows mantle convection cells that are intimately related to lithospheric spreading centers and subduction zones.  The caption to the figure states "Earth's plates are thought to move as a result of underlying mantle convection cells in which warm material from deep within Earth rises toward the surface, cools, and then, upon losing heat, descends back into the interior.  The movement of these convection cells is thought to be the mechanism responsible for the movement of Earth's plates, as shown in this diagrammatic cross section."  This image below, from a web search (http://www.yorku.ca/esse/veo/earth/image/1-3-2.JPG) demonstrates this model, and is very similar to MW Fig. 1.9 (probably from an earlier edition of the textbook):

This isn't the only introductory text that makes this error, and it certainly isn't the only error found in many introductory textbooks.  It's still a good textbook - but this figure is wrong.  In fact, if you google "mantle convection", you'll see lots of images & sites that continue this error of directly linking mantle convection with plate motion.


"The question of what drives the plates remains controversial to this day.  In the years immediately following the proposal of plate tectonics, many geoscientists tacitly accepted a convection-cell model, which stated that convection-driven flow in the mantle drives the plates.  In this model, plates were carried along the back of flowing asthenosphere, which was thought to circulate in simple elliptical (in cross section) paths; upwelling (upward flow) of hot asthenosphere presumably occurred at mid-ocean ridges, while down-welling (downward flow) of hot asthenosphere occurred at the margins of oceans or at subduction zones.  In this model, the flowing asthenosphere exerts basal drag, a shear stress, on the base of the plate, which is sufficient to move the plate.  This image of plate motion, however, was eventually discarded for, while it is clear that the mantle does convect, it is impossible to devise a global geometry of convection cells that can explian the observed geometry of plate boundaries that now exist on Earth.  Subsequent calculations showed that two other forces, ridge push and slab pull, play a major role in driving plates."

Van der Pluijm & Marshak then go on to describe ridge-push force & slab-pull force in more detail.  This chapter is a great starting point for anyone who is interested in learning more about plate driving forces, and there are a number of references given at the end of the chapter for further reading.  Notably, Marshak has also written an introductory geology textbook "Earth: Portrait of a Planet" where this is explained correctly, but I think this might be the only introductory textbook out there to get this right!

It is certainly true that without a flowing, convecting asthenosphere, you cannot have a subducting lithosphere.  Hence, mantle convection is intimately tied to plate tectonic motions.  But it is overly simplistic to state that mantle convection drives plate tectonics.  The two systems, mantle convection and lithospheric plate movement, are related and connected to one another, but they are not a simple, single system.  Plate tectonic motion is really a passive system, largely driven by gravitational forces acting on materials that become unstable due to their density.  Once a lithospheric plate begins to subduct, the density of the plate pulls the plate down, exerting a pulling force on the rest of the plate at the surface, much like a table cloth hanging off one one end of a table too far and the whole thing slides off.  The effects of slab-pull & ridge-push forces can be seen in the rates of plate motions.  For example, the Pacific plate is bounded by the East Pacific rise and other ocean ridges to the east, and by a number of subduction zones on the western side.  The Pacific plate is cruising along at a quick pace of ~9 cm/year, largely due to the added force of slab pull.  Conversely, the in the Atlantic where subduction zones are very minor, the spreading rate is less than 1/3 of that, at only ~2.5 cm/year.
Posted by CWCarrigan at 8:32 AM No comments: