I readily admit I'm not a great photographer, but occasionally I get a shot worth sharing. Here's a picture I took of Diamond Head Crater while on vacation in Hawaii. 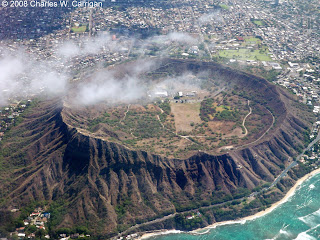 The shot was taken from an aircraft (obviously); we were on a commercial flight from Honolulu to Hilo. I had a window seat and was looking north. The clouds parted just perfectly for a moment and I was able to get this shot. My wife and I had just climbed Diamond Head a day or two before, but seeing it from the air was really stunning.

Diamond Head crater is interesting geologically because the volcanic eruptions from this crater, and a number of others like it on Oahu, are much younger than the rest of the island. Most people are aware, I hope anyway, that the Hawaiian Islands were formed as the Pacific plate moved across the top of a hot spot. The hot spot is still active today, producing volcanism on the Big Island. Most of the volcanic rocks of Oahu are between 2-4 million years old. Oahu is now over 200 miles from Kilauea, and the age of the island is consistent with the modern tectonic rate of movement of the Pacific plate at around 9 cm/year. But Diamond Head and a number of other volcanic craters are much younger, less than 500 thousand years old. By this point, Oahu was well beyond the hot spot, and most of Oahu had been undergoing erosion for over a million and a half years! So based on all of this, these young volcanic craters on Oahu are very strange - if Oahu was not over the top of the hot spot anymore, why were these volcanoes erupting? This is a point of current research & debate among geoscientists.
Posted by CWCarrigan at 10:28 PM